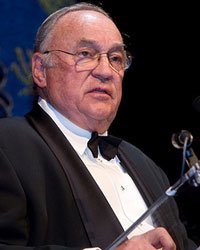 The youngest of three children, Thomas J Fogarty was born February 25, 1934, into an Irish Catholic family living in Cincinnati. His father worked as a railroad engineer but died when he was just eight years old. Fogarty took an active role in the family, taking care of things his father might have.

A Cardiovascular surgeon, an inventor, an entrepreneur and a professor of medicine at Stanford University today, Dr Thomas Fogarty invented the embolectomy balloon catheter in 1961 while still in medical school. His catheter patented in 1969 revolutionized vascular surgery--it is still the most widely used technique for blood clot removal--and encouraged advances for other minimally invasive surgeries, including angioplasty.

Dr. Fogarty received his undergraduate education at Xavier University and his medical degree from the University of Cincinnati. He completed his residency at the University of Oregon and later served as Medical Staff President at Stanford Medical Center from 1970-1979. After thirteen years directing the Cardiovascular Surgery Program at Sequoia Hospital, Redwood City, he returned to academic life at Stanford University School of Medicine in July 1993 as Professor of Surgery.

Fogarty has served as founder, co-founder, and chairman or board member of more than 33 business and research companies, based on medical devices designed and developed by Fogarty Engineering Inc.

In the past 40 years he has been named on over 100 surgical instrumentation patents, including the “industry standard” Fogarty balloon embolectomy catheter and the widely used Aneurx Stent Graft that replaces open AAA surgery. Dr. Fogarty holds countless awards and honors – most notably, he is the recipient of Jacobson Innovation Award of the American College of Surgeons, the Lemelson-MIT Prize for Invention and Innovation and an inductee of the National Inventors Hall of Fame.