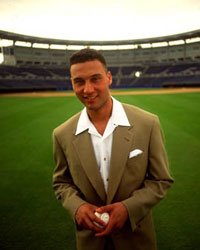 Derek Sanderson Jeter born June 26, 1974, lived in North Arlington, New Jersey, before moving to Kalamazoo, Michigan. His father is African-American. His mother Dorothy Jeter nee Connors is Irish and German. The elder of two kids, he has a sister, Sharlee—Derek grew up in a sports-crazy home. The family moved to Kalamazoo, Michigan from New Jersey, Derek, however, never changed his baseball allegiance. He loved the New York Yankees.

Derek and Sharlee spent their summers with their grandparents, Dot and Bill Connors, at their West Milford home in Bergen County, NJ. With the Yanks just on the other side of the George Washington Bridge, Derek pictured himself in pinstripes as he played with his friends and visiting cousins. Dot, his grandmother was his personal catcher.

As a consistently strong athlete, he has earned the respect and admiration of coaches, sports commentators, peers, and fans. So far Jeter has a career battling average of .316 and average fielding percentage of .975. In 2009, Jeter passed Lou Gehrig's record with this 2,722nd hit — the most in franchise history.

Jeter has also used his celebrity and his prominent position as a sports star to help children. In 1996, he established the Turn 2 Foundation to encourage young people to be healthy and academically successful, to become leaders, and to stay away from drugs and alcohol. The foundation supports and creates programs to achieve these goals.