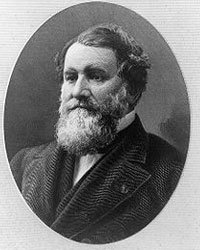 Born February 15, 1809 in Rockbridge County, Virginia, the eldest son of Robert and Mary Ann McCormick, Cyrus Hall McCormick received only a limited formal education, however he showed a talent for mechanics and soon learned the skills of his father, who had been experimenting with farm machinery since about 1816. His father Robert patented a thresher and other farm machines, but none of them were commercially successful, and his attempts to build a mechanical reaper,a device capable of cutting grain, ended in failure. In 1831, Robert abandoned work on the reaper and Cyrus took over the project.

With a new perspective on the project, Cyrus built a machine that departed radically from his father's designs. Its workings, including the gearings, reciprocating knife, projecting teeth, and rotating reel became the basis for modern-day harvesting machines. McCormick gave a public demonstration of his reaper in a field outside John Steele's tavern in July 1831. He further improved the machine and exhibited it in Lexington, Virginia, the following year.

In 1833 Obed Hussey, who was to become McCormick's chief rival, publicly demonstrated his own reaper outside of Cincinnati, Ohio. Patenting his invention in 1834, McCormick started to manufacture the machine on the family estate in 1837,  they sold well enough to provide McCormick with some capital to establish his own factory. Six years later he began to license its manufacture in other parts of the country. In 1844 McCormick made arrangements for the manufacture of his machines at factories in New York, Ohio, and other states; McCormick, aware that the rapid opening of the Midwest and Great Plains to settlement would lead to demand for farm machines, and realizing the strategic importance of a midwestern location, opened a factory in Chicago in 1847, where he produced 800 reapers the first year, founding what eventually became one of the greatest industrial establishments in the United States.

McCormick steadily improved his reaper and supplemented his own patents by acquiring the patents of others. These acquisitions gave McCormick the competitive edge over Hussey. Following the Great Exhibition in London in 1851, at which both men displayed their machines, McCormick's business overwhelmed Hussey. In 1858, the year that Hussey sold out, McCormick was producing 4,000 machines annually.

Cyrus McCormick became a prominent public figure. He came to wield a great deal of influence among government officials, Congress, and the United States Patent Office. He left the manufacture and development of his machines to employees while he spent much of his time in court rooms and hearing chambers defending his patent rights and pursuing national and international recognition. Much of the campaign funds of a young lawyer from Illinois, Abraham Lincoln,came from his legal representation of McCormick's bitterest rival, John H. Manny.

In 1871 the McCormick factory burned to the ground in the great Chicago fire. With the encouragement of his wife, he not only rebuilt the business but rebuilt much of Chicago as well. For this, several Chicago landmarks are named for him.

The McCormick Harvesting Machine Company merged with Deering Harvester Company and three smaller manufacturers to become the International Harvester Corporation in 1902. In the spirit of McCormick, the company diversified, becoming a world leader in the manufacture of agricultural machines and equipment, light- and heavy-duty trucks, and lawn and garden tractors. A long and bitter labor dispute in the early 1980s dealt a severe financial blow to International Harvester, and the company restructured itself and changed its name to Navistar Corporation.