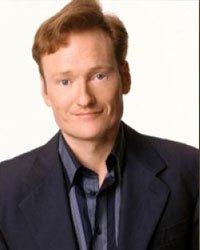 Conan O'Brien was born April 18, 1963 in Brookline, Massachusetts, a suburb of Boston to Thomas O'Brien, a physician, and professor of medicine at Harvard and Ruth O'Brien (née Reardon), an attorney and partner at the Boston firm Ropes & Gray.

He is the third of six children. O'Brien's family is Irish Catholic and descends from pre-Civil War era immigrants. In a Late Night episode, O'Brien paid a visit to County Kerry, Ireland, where his ancestors originated. O'Brien repeatedly affirms his Irish Catholic heritage. On a 2009 episode of Inside the Actors Studio, he stated that both sides of his family moved to America from Ireland in the 1850s, subsequently marrying only other Irish Catholics, and that his lineage is thus 100% Irish Catholic.

O'Brien moved to Los Angeles after graduation to join the writing staff of HBO's Not Necessarily the News.  In January 1988, Saturday Night Live's executive producer, Lorne Michaels, hired O'Brien as a writer. During his three years on Saturday Night Live (SNL), he wrote such recurring sketches as "Mr. Short-Term Memory" and "The Girl Watchers"; the latter was first performed by Tom Hanks and Jon Lovitz.

In 1989, O'Brien and his fellow SNL writers received an Emmy Award for Outstanding Writing in a Comedy or Variety Series.

From 1991 to 1993, O'Brien was a writer and producer for The Simpsons and was credited as writer or co-writer of four episodes. He was an active producer during seasons 4 and 5 and would frequently contribute to scripts, come up with story ideas, plot points, and jokes. The style of the show's comedy during this period was also somewhat influenced by his comic sensibilities.

As executive producer of SNL, Lorne Michaels invited O'Brien to audition to host the successor show to Late Night with David Letterman. Premiering on September 13, 1993, Late Night with Conan O'Brien ran for 16 years with The final Tonight Show with Conan airing January 22, 2010. Conan is set to host a new show on cable station TBS.