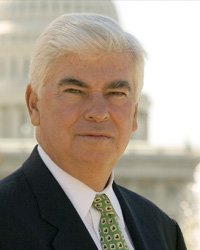 Born May 27, 1944 Christopher John "Chris" Dodd is an American lawyer and Democratic Party politician serving as the senior United States Senator. Born in Willimantic, Connecticut his parents were Grace Mary Dodd (née Murphy) and U.S. Senator Thomas Joseph Dodd; all eight of his great-grandparents were born in Ireland.

Dodd served as general chairman of the Democratic National Committee from 1995 to 1997. He serves as Chairman of the Senate Banking Committee. In 2006, Dodd decided to run for the Democratic nomination for President of the United States, but eventually withdrew after running behind several other competitors. In January 2010, Dodd announced that he would not run for re-election in the 2010 midterm elections.