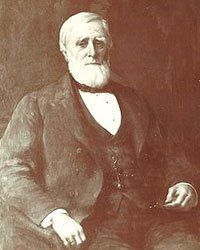 Charles Patrick Daly was born in New York City, 31 October 1816. A member of the New York State Assembly, Chief Justice of the New York Court of Common, president of the American Geographical Society and an author of several books, ironically he received a little schooling in his early years choosing instead to go to sea, serving three years, and later became a mechanic's apprentice.

Upon return to New York he studied law and was admitted to the bar in 1839, elected a member of the legislature in 1843, became justice of the court of common pleas in 1844, first judge in 1857, and chief justice from 1871 to 1886, his term expiring by limitation of age, when he returned to the practice of his profession.

In 1860 he received from Columbia the degree of LL.D. Justice Daly has for many years been president of the American geographical society, lectured at Columbia law-school, delivered discourses before learned societies, and made public addresses. The Daly ancestors were the O'Dalys of County Galway, Ireland. In 1814, two years before Daly's birth, his parents immigrated to the U.S. from Omagh, County Tyrone, Ireland. Daly was born in New York, New York, USA. His father, Michael, had been a master carpenter in Ireland, but in New York City, he worked as the manager of a hotel on Broadway. His mother, Elizabeth, died when Daly was age three.