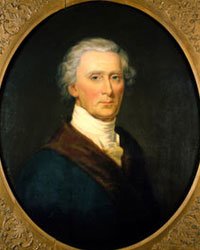 Born on September 20th 1737 at his father's townhouse, Carroll Mansion of Annapolis in Maryland, Charles Carroll III was the only Catholic to sign the Declaration of Independence.

His grandfather, Daniel Carroll, was Irish and was a clerk in the office of Lord Powis, in the reign of James the Second. Under the patronage of Lord Baltimore, the principal proprietor of Maryland, Mr. Carroll emigrated to that Colony toward the close of the seventeenth century, and became the possessor of a large plantation. His son Charles, the father of [Declaration of Independence signer Charles Carroll], was born in 1702, and lived to the age of eighty years, when he died and left his large estate to his eldest child, Charles, who was then twenty-five years old.
When he was only eight years of age, his father, who was a Roman Catholic, took him to France, and entered him as a student in the Jesuit College at St. Omer's. There he remained six years, and then went to another Jesuit seminary of learning, at Rheims. After remaining there one year, he entered the College of Louis le Grand, whence he graduated at the age of seventeen years, and then commenced the study of law at Bourges.

One of the wealthiest men in America, Charles Carroll III of Carrollton served as a U.S. Senator in the first Congress, and risked his fortune as well as his life when he joined the Revolutionaries. Possessing one of the most cultivated minds of any of the signers, he achieved remarkable success as planter, businessman, and politician. He was the last of the signatories to die.

Carroll sailed home from his European studies in 1765 at the age of 28, and built a home at Carrollton Manor, a 10,000-acre estate in Frederick County newly deeded to him by his father. At that time, he added "Carrollton" to his name to distinguish himself from relatives of the same name.

In 1773 Carroll became a champion of the patriots through his newspaper attacks on the Proprietary Governor. The latter was opposing reforms in officers' fees and stipends for Anglican clergy that the lower house of the legislature had proposed.