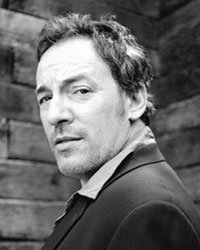 Bruce Springsteen or as affectionately know in music circles 'The Boss'  can trace his Irish roots to famine ravaged Ireland in the 1850's. Springsteen's great great grandmother Ann Garrity emigrated from Mullingar Co Westmeath to the United States in 1852 and settled in the town of Freeehold New Jersey where Bruce Frederick Joseph Springsteen was born on 23 September 1949. In his family tree he can count numerous Irish names including Farrell, Sullivan, O' Hagan and McCann as well as Garrity.

The Springsteen surname comes from Bruces grand father Anthony who married a woman called Martha O' Hagan. Springsteen's career has spaned from the 1960/1970's and is still going strong, with more than 120 million albums sold world wide, 20 Grammy awards, two golden globes and an academy award for his song Streets of Philidelphia, his most famous albums include Born to Run and Born in the U.S.A.

Rolling Stone magazine ranked Born to Run and Thunder Road in its 500 Greatest Songs Of All Time list.
Bruce is currently married to his second wife and living in new Jersey with his three children.