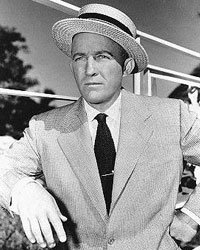 Born in Tacoma, Washington, on May 3, 1903 Bing Crosby became the archetypal crooner of a period when the advent of radio broadcasting and talking pictures and the refinement of sound-recording techniques made the climate ideal for the rise of such a figure. His casual stage manner and mellow, relaxed singing style influenced two generations of pop singers and made him the most successful entertainer of his day.

The fourth of seven children born in Tacoma, Washington to parents, Harry Lincoln Crosby (1870–1950), a bookkeeper, and Irish-American Catherine Helen (affectionately known as Kate) Harrigan (1873–1964), were English-American. Kate was the daughter of Canadian-born parents who had emigrated to Stillwater, Minnesota, from Miramichi, New Brunswick. Kate's grandfather and grandmother, Dennis and Catherine Harrigan, had in turn moved to Canada in 1831 from Schull, County Cork, Ireland.

Bing studied law at Gonzaga University in Spokane but was more interested in playing the drums and singing with a local band. Bing and the band's piano player, Al Rinker, left Spokane for Los Angeles in 1925. In the early 1930s Bing's brother Everett sent a record of Bing singing "I Surrender, Dear" to the president of CBS. His live performances from New York were carried over the national radio network for 20 consecutive weeks in 1932. His radio success led Paramount Pictures to include him in The Big Broadcast (1932), a film featuring radio favorites. His songs about not needing a bundle of money to make life happy was the right message for the decade of the Great Depression. His relaxed, low-key style carried over into the series of "Road" comedies he made with pal Bob Hope. He won the best actor Oscar for playing an easygoing priest in Going My Way (1944). He showed that he was indeed an actor as well as a performer when he played an alcoholic actor
down on his luck opposite Grace Kelly in The Country Girl (1954).

By the late 1930s his records were selling millions of copies. His songwriting activities included part-authorship of “A Ghost of a Chance” and “Where the Blue of the Night” (his radio theme song). His recording of “White Christmas” became one of the most popular songs of the century, exceeded in record sales only by his “Silent Night.” In the 1940s he was the star of a popular radio variety show.

Crosby ran a successful television production company in the 1960s. An astute businessman, he amassed one of the largest fortunes in Hollywood from his earnings as an entertainer and from shrewd investments. By the mid-1970s, 400 million copies of his records had been sold. He was a notable sportsman and died of a heart attack while on a golf course.