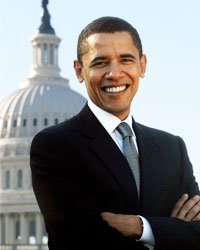 Barack Hussein Obama II born August 4, 1961 is the 44th and current President of the United States. He is the first African American to hold the office. Obama previously served as a United States Senator from Illinois, from January 2005 until he resigned after his election to the presidency in November 2008.

Barack Obama’s third great grandfather was born in Ireland and immigrated to the United States in 1850. Originating in Moneygall and neighboring Shinrone in County Offaly, Ireland, baptism and probate records linking the family line back to Moneygall have been unearthed in the Templeharry Rectory records.More than a century and a half ago, 19-year-old Falmouth Kearney, (Obama’s third great-grandfather), sailed from Ireland, landing in New York harbor on March 20, 1850.

Settling initially in Ohio among Irish relatives, Falmouth married, had eight children, and eventually moved to Indiana. Three of Falmouth’s daughters married three brothers with the last name Dunham. Obama’s mother is descended from one of these couples — her birth name was Dunham.

Barack Obama is the son of an African man and an American woman. His father, Barack Obama Sr., was born in a small village in Kenya. Ann Dunham, the mother of Barack Jr., was born in a small town in Kansas. Barack Sr. and Ann met in Hawaii. He was attending the University of Hawaii on scholarship, and her family had moved there after her father had returned from fighting in World War II. Barack Jr. was born on August 4, 1961.

Barack Sr. returned to Kenya, and Ann reared Barack Jr. by herself. They lived in Hawaii and in Indonesia. Barack attended Occidental College in Los Angeles, then moved to New York and ended up graduating with a political science degree from Columbia University, in 1983.

A couple years later, Obama moved to Chicago to work as a community organizer and director of the Developing Communities Project, a church-based group formed to improve living conditions for people in poor neighborhoods. A few years later, he went back to school, earning his law degree in 1991, from Harvard. He was the first African-American president of the Harvard Law Review.

During a summer work study in Chicago in 1989, Obama had as his adviser a woman named Michelle Robinson. They worked together for a few months and began dating after awhile. They were engaged in 1991 and married in 1992. Their first child, Malia, was born in 1998. Natasha, their second child, was born in 2001

Armed with his law degree, Obama moved back to Chicago and began teaching at the University of Chicago Law School. He joined a well-known Chicago law firm in 1993. Two years later, he published a memoir titled Dreams from My Father.

Convinced that he had a different sort of calling, Obama decided to run for political office. He was elected to the Illinois State Senate in 1996 and served there for eight years, then was elected to the U.S. senate, in 2004. A member of several influential committees and author of a handful of well-known bills, Obama gained national recognition when he gave the keynote address at the 2004 Democratic National Convention. Recognition from that speech was widespread and immediate. Obama built on his reputation and, two years later, announced his candidacy for the Presidency.