Irish American Museum - About us 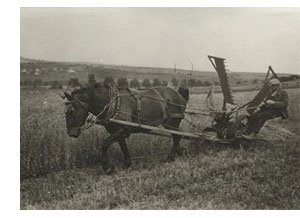 Cyrus Hall McCormick (February 15, 1809 - May 13, 1884) was an Irish American inventor. At the age 15, Cyrus invented a lightweight cradle for harvesting grain. He later had an idea to combine the steps involved in harvesting crops and developed the first mechanical reaper. He developed his idea by inventing a horse-drawn reaper that used back-and-forth-moving cutting blades. Next, a revolving device pushed the cut grain onto the back of the machine. He patented his "Improvement in Machines for Reaping Small Grain" on June 21, 1834. This machine made farming easier - and greatly increased the amount of food farmers could reap, made harvesting easier, lowered costs, and revolutionized farming. What was his company is now called Navistar international. 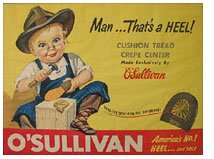 Humphrey O'Sullivan was an Irish immigrant to the United States who received the first patent for a rubber heel for shoes on January 24, 1899. He was working in a print shop, standing on the hard floor all day long. His feet were killing him by the time he got home so he started standing on a small rubber mat. It was such a good idea that his coworkers started stealing it! Then he had an idea! Attach that rubber to the soles of his shoes and no one would steal them again!
It was such a success that he got a patent for it and opened his own company! O'Sullivan Corporation is still in existence, manufacturing and distributing plastics for the automotive and manufacturing industries. 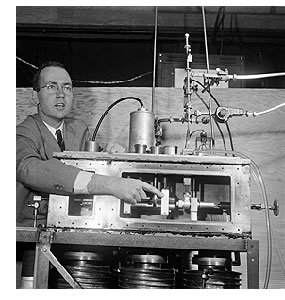 Charles Townes (1915-) is a Nobel Prize winning physicist (1964), inventor, and Irish American. Invented the laser.His study of and investigation of the properties of microwaves helped him invent the maser. A maser amplifies electromagnetic waves and was the basis for the laser. Townes holds patents for both the maser and the laser.